Today, Tuesday June 7, is the FINAL day Raven Lake is available for the special promo price of 99 cents! 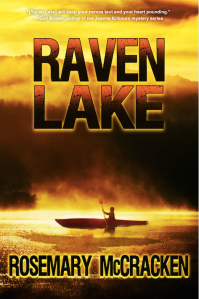 Thank you, Kristina, for hosting me here today. When I think of your Stone Mountain mysteries, their spectacular setting pops into my mind—a ski resort high in the Canadian Rocky Mountains. So I thought it would appropriate to share some of my thoughts about setting with your followers.

Setting is the backdrop against which characters act out the events of the story. But it’s impossible to powerfully capture a setting by objective description alone. Today’s readers will just skim over paragraphs of exposition. It is through the eyes and heart of a character that a place comes alive. How does the character feel about this place where she lives or is visiting? That, and a few vivid details, can create your story’s backdrop.

Historical novels—set in Tudor England, ancient Egypt and Rome, the American Old West—seem ideally suited to display setting. Their authors have researched the visual backdrops: the buildings, the clothing, the modes of transportation. But they also need to create a sense of the times on the page through dialogue and their characters’ body language and manners.

Settings are either real or fictitious. If your character finds herself in Paris, you have a real setting and your readers probably know enough about Paris to form a mental picture of the city. But you’ll need to make sure you have your facts straight. You may want to save up for a trip to Paris to find out how long it takes to ride the Métro from Champs Élysées to Port-Royal. (And at tax time, you can claim the trip as an expense against earnings from your writing.)

For stories such as Alice in Wonderland and Lord of the Rings, their authors had to create fictional settings, which takes a lot of work. They had to map out their fictional landscapes carefully in order to present them clearly to their readers.

Safe Harbor, my first Pat Tierney novel, is set in Toronto, where I currently live. I used neighborhoods that I know well, but I fictionalized some things such as the name of a Toronto newspaper, the Toronto World. In his review in the real Toronto Star, Jack Batten wrote that Safe Harbor has “an exact feel for the Toronto locales.”

I set Black Water, the second mystery in the series, and Raven Lake, the third that has just been released, in Ontario cottage country north of Toronto. The setting is inspired by the Haliburton Highlands, lake country on the Canadian Shield north of Toronto that I know and love, but I’ve fictionalized it. I call it the Glencoe Highlands, and I’ve created a town called Braeloch, which incorporates some aspects of the two real towns in the area, Minden and Haliburton Village. I needed to create special places in Braeloch and in the surrounding countryside for my plots that don’t exist in the actual area.

In the planning process before I start writing, I draw up a list of the key settings that I know will appear in the novel—and others may crop up as they are needed. Pat Tierney’s home or where she is based in that story will always be an important location. The wider geography of the area is also featured in Black Water and Raven Lake. In the first, Pat drives over the township’s frozen lakes in a snowmobile. In the second, she explores the same chain of lakes in a kayak.

There are times when setting seems to participate in the story. Places in a novel may have a special—maybe even a magical—significance. The diner where the protagonist and her friends hung out when they were teenagers. The stone quarry where they swam in the summer. In Raven Lake, Pat’s kayak takes her to places she would have difficulty reaching without it, and her trips over the lakes help her unwind and think about the puzzles she’s trying to solve.

Setting can be effective when it goes against readers’ expectations. Ray Bradbury uses a carnival setting for terror in Something Wicked This Way Comes. In Stephen King’s The Mist, people are trapped in a supermarket when a fog filled with nightmare creatures surrounds the store. In Raven Lake, a murder takes place during a Canada Day fireworks show.

But beware of going overboard with setting. You may have spent hours on research, but you don’t need to use everything you dig up. A rich, detailed setting can overwhelm the story. The setting should always be positioned behind characters and events.

WHO IS Rosemary McCracken?

Rosemary McCracken has worked on newspapers across Canada as a reporter, arts reviewer, editorial writer and editor. She is now a Toronto-based fiction writer and financial journalist. Her first Pat Tierney mystery, Safe Harbor, was shortlisted for Britain’s Crime Writers’ Association’s Debut Dagger in 2010 and published by Imajin Books in 2012. It was followed by Black Water in 2013. “The Sweetheart Scamster,” a Pat Tierney mystery in the anthology Thirteen, was a finalist for a Derringer Award in 2014. Rosemary’s third Pat Tierney mystery, Raven Lake, has just been released! Jack Batten, the Toronto Star’s crime fiction reviewer, calls Pat “a hugely attractive sleuth figure.”

Here are links for the books mentioned in the blurb above. The first three are universal links for Amazon, so whoever clicks on them will reach the Amazon in his/her own country.. Thirteen’s is a link to Amazon.com